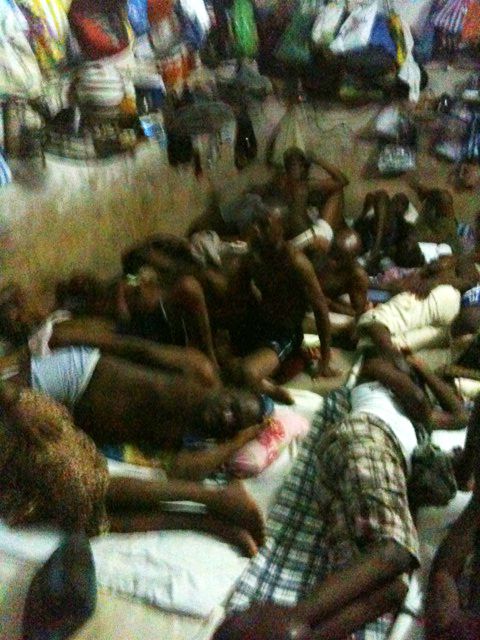 A CRY FOR HELP OF A POLITICAL PRISONER TORTURED IN TOGO

This is the raw, unedited testimonial of Abdoul-Aziz Goma, a citizen of Ireland of Togolese origin who was arrested in December 2018 in the aftermath of a protest called by Togolese opposition parties. These testimonials, although it comes from just one of the detainees, is the reality of all political prisoners who are arrested and detained by the military regime of Togo. There are currently over 60 political prisoners in Togo. Most have never faced trial and are not legally represented. The government of Togo continue to torture civilians and bn protests which are a constitutional right.

The story I am about to tell you will upset you, but unfortunately this is the situation I am currently experiencing.

I am a businessman by profession and as part of my activities, I traveled from

Manchester 09 November 2018 to Lome (TOGO) following a cargo of goods that I had to transport from Manchester.

Meanwhile, I made a trip to Togo with the intention of asking my friend

I was able to meet my friend and went back to Lomé. Since my return to Lome, I lived peacefully with my driver KEVIN and my guide KARROU Wawim while thinking about organizing the sale of my goods, when suddenly I received a phone call from a friend living in Accra asking me to help a number of young people (08 people) from Accra (GHANA) who would be in a difficult situation because the gentleman who invited them was finally unreachable.

I did not know these young people at all, everything was taking place on December 19, 2018.

The friend who contacted me from GHANA had one of his brothers in the group, but apparently was not informed of their trip to Lome and would have heard the news from others;

the gentleman for whom they had traveled was unreachable.

Taken of altruism and compassion for his young people without money and especially who do not know where to spend the night, without procrastination I decided to bring them my help. So I asked a brother named YAYA SOULEMANE to host the 08 people. He had therefore contacted one of his friends and the solution was found on this point.

It should be noted that these young people were not known to YAYA SOULEMANE either.

It was after that that I questioned them about the reason for their coming to Lome, he let me know that they had come for a march of protest against the Legislative elections scheduled for the next day, December 20, 2018. But, that the person who invited them was finally not reachable.

This is a certain KABILA whose identity I do not know. Faced with this situation, I asked them how much did they need for the costs of returning to Ghana? To my question, they let me know that they needed 30,000 Francs CFA. Without hesitation, I gave them a sum of 50,000 Francs CFA for them to leave the next morning at the first hour;

it is on this gesture that we separated. The next day, December 20, 2018, the borders were closed because of elections; the young people could not go home. That's how they came back to where they were housed and there

have spent the whole day.

Not being able to leave them to their fate, I asked the wife of the brother YAYA

SOULEMANE to make them eat.

In the evening they finally got to get in touch with the name KABILA who invited them to Lome.

In order to thank me for the help I had to bring to the group of young people, the named KABILA asked to see me. I went to meet him at the place where the young people were staying and he had not failed to express all his gratitude and decided to relocate the youth to another Hotel.

Without intervening, I separated from them since they were finally with their host. I insist that my guide KARROU Wawim, Brother YAYA SOULEMANE and I did not know them before.

On 21 December 2018 at about 19h 00min, my guide KARROU Wawim, my driver Kevin, a lady called. Rebecca and myself, went to a bar to refresh a little, then we are going to dinner in a restaurant (Camillo) located at the boulevard of 13 January. After dinner, we went back home. Arrived right in front of the pharmacy of Gbossime on the boulevard de la Kara, where Rebecca was to be taken, suddenly a group of armed men encircled us with unimaginable brutality and extreme violence. Without question, they beat us up. After that, they handcuffed us, KARROU Wawim, the KEVIN driver, the REBECCA girl and I, and then embarked on their car. They had seized mine. Throughout the journey, they subjected us to inhumane treatments until we arrived at our destination, the Directorate of Intelligence and Investigation (IR).

That day we had gone through hell. We were handcuffed from behind tightly to the bone against trees, others against cars, we were beaten up, tortured to the point of bleeding.

I was vomiting blood under this treatment. This torture lasted until 03:00 in the morning it was really hell; I even prayed to God to take away my life rather than suffer all these tortures;

our executioners were of a unity whose body I do not know. They would be U.S.I.G,  and would be the group of torturers according to what I had heard. Until early morning, they did not ask us any questions.

Around 07:00 in the morning, they came to demenot us around the trees and cars, and we were thrown into the dust, shuffled we stayed there, on the ground, until noon under a blazing sun before taking us back under the trees.

We did not know until then, what we are reproached. Only after having tortured us well, they interrogated us and accused us of having appealed to some young people from GHANA for destabilization projects.

So I was taken to my house for search without finding any evidence of wrongdoing, my seized car was also searched, my cargo was not spared. This was even seized and sealed. They took me to the port to proceed with the

search of my cargo; which search lasted from 08H in the morning until 18H.

In short everything was searched thoroughly, but nothing was found. All these searches did not allow them to find the slightest clue to finally hold a charge against my companions

and me. Their goal is to find evidence to support false accusations. All

shows that this is a conspiracy and an arbitrary arrest, but our trackers are far from giving up their goal.

Throughout this day we neither had food or water but always handcuffed. After  (02) weeks of torture, only the lady REBECCA and the driver KEVIN were released.

My brother YAYA SOULEMANE who had found the solution to the accommodation of the young people in question, for this simple reason and for having given food to people by

altruism and solidarity had suffered the same fate as me.

Being always kept at the Directorate of the Intelligence and Investigation Service (S.R.I),

on January 09, 2019 late at night, we were shipped naked for the Directorate of the National Gendarmerie located opposite the Togolese Bank of Commerce and Industry (B.T.C.I) on the boulevard of January 13; that night, they made us sit next to each other's backs on the wall, still handcuffed, 03 agents in total including 03 from (U.S.I.G) Special Unit of Intervention of the

Gendarmerie, 04 of the Gendarmerie and their Commander in the name of KABIA, each of them had his weapon well pointed at each and every one of us.

There, we had all prayed to God because we thought it was the end of our life.

The commander when loading his automatic pistol, dropped the bullet from his gun.

Sometime later he no longer gave the order to fire on us.

It was too hard for us; God was always in control, we were thrown into a dungeon in a catastrophic state. Still handcuffed, we could not even tell the difference between day and night; without any notion of time, without a visit, it should be noted that we had spent 27 days in the hands of the Intelligence and Investigation Service, without having a shower or brushing our teeth. Perhaps this is unbelievable, but I cannot even remember what we ate all that time.

On January 15, 2019, they sent us before the examining magistrate on the grounds that I (ABDOUL -AZIZ GOMA) was an agent who funds the PNP (National Pan African Party), a political party in Togo simply for having given my assistance to 50,000 Francs CFA to people who did not know where to sleep. But only God knows!

Actually, I was never involved in politics; I do not know anything about it. I even told them to investigate my personality and they will see that I am only a businessman who clings to his activities.

This is not all, they accuse me in other, to be an emissary of the Togolese diaspora in Europe.

To all these accusations I have contradicted; because in all sincerity I do not recognize anything they reproach me for. We ended up being thrown into prison (the Lomé Civil Prison) on hearing the investigations; until today. It must be remembered that Togo has been a country governed by a dictatorial regime for half a century; where human rights and human dignity are flouted. A country where, the separation of powers is nothing but a chimera: justice is in the hands of tyrants, and the Universal Declaration of Human Rights is disavowed; if not, I will already be released, even compensated, since to date they have no proof of the charges against me.

But unfortunately, they persist in detaining me.

The paranoia that I will be the financier of an opposition political party and the denial of human rights and fundamental freedoms are among others, reasons that push them to treat me with disdain.

I had no right to a lawyer, nor the right to inform the authorities of my country, IRELAND, of what is happening to me; I was even prevented from doing so.

I do not know how to describe the conditions of this prison, but I can tell you

make sure it's worse than hell.

To this day we are still incarcerated in this civilian prison of Lomé.

A prison of 600 persons normally, which shelter more than 2000 prisoners; imagine the overload in each building. We only eat once a day, sometimes we do not even eat and what kind of food! Even the animals are better fed.

At night, we are piled up like sardines, others are standing from 17H 30min until morning. The conditions here are inhumane and degrading,

In short, here are the conditions of our arbitrary arrest and the inhumane and degrading treatment that I continue to suffer ... I send a cry of distress to the Irish authorities because it is total disarray;

I do not know how long it will last, but I do not think I can hold for a long time.

I need my country. SAVE ME ! Please, get me out of here, I beg you.